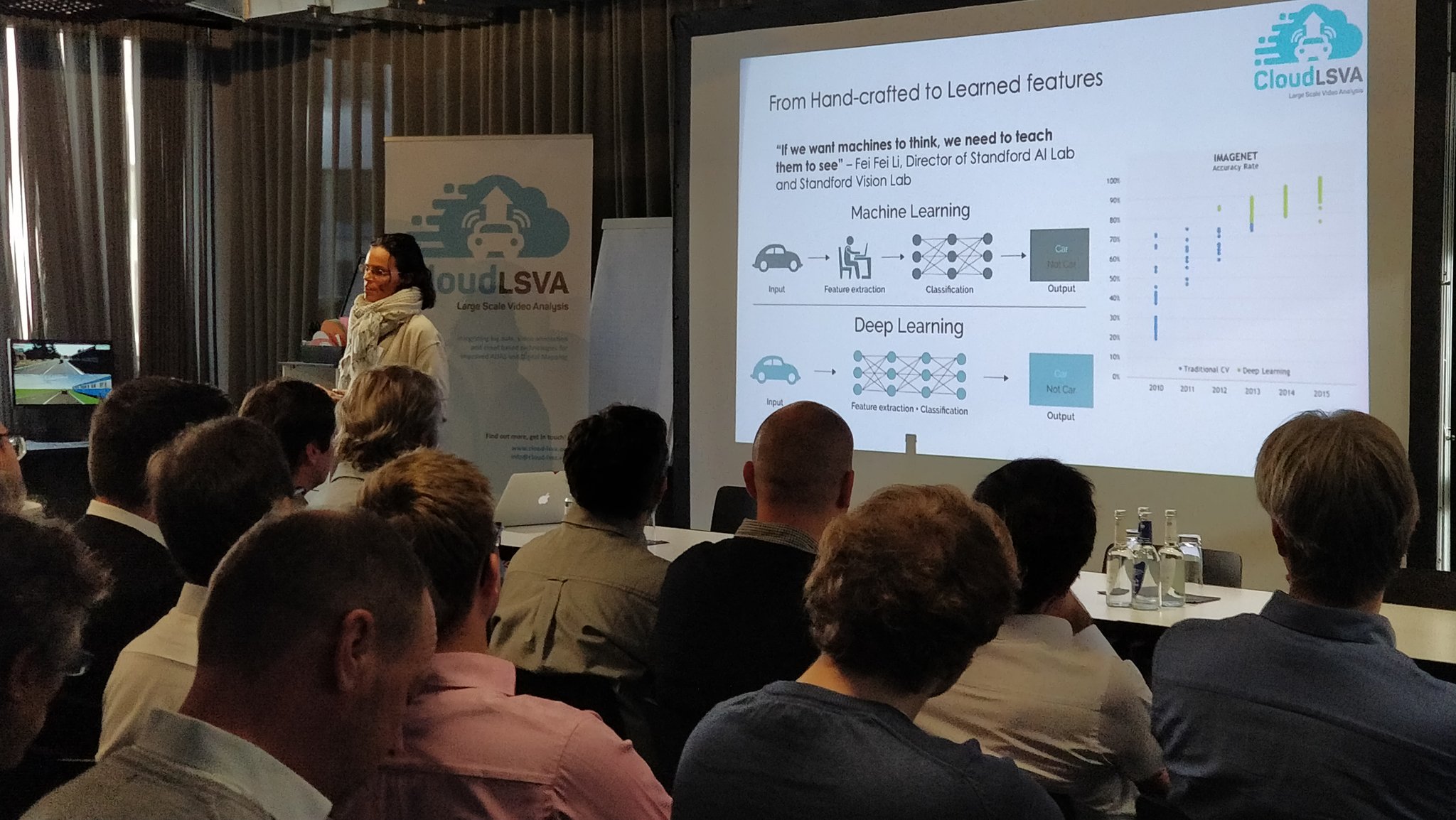 On 29 November, Stuttgart hosted the final event for the EU funded project Cloud LSVA. Through live demonstrations in cars, engaging panel discussions and presentations, top research bodies and industry representatives showcased the key findings of the project which develops advanced Large Scale Video Annotation for autonomous vehicles and much more.

One of Germany’s most important automotive cities hosted the final event of the EU-funded project that develops the technology for scene recognition in Autonomous Vehicles (AV), Cloud LSVA. Started in 2015, the project consortium lead by Vicomtech and composed by CEA, Dublin City University (DCU), ERTICO-ITS Europe, IBM, Intel, Intempora, Tass, TomTom, University of Eindhoven (TU/e), University of Limerick and Valeo showcased the results of research and testing to a full room of participants.

Transportation is evolving at a fast pace, involving the use of new technologies to make it more autonomous. For this purpose, Artificial Intelligence (AI) and 3D analytics are applied to vehicles for Scene Recognition, Semantics, Computer Vision and Deep Learning and in this framework, Cloud LSVA develops just one, but yet very important aspect of autonomous driving, which is real-time video annotation. Annotating vast amounts of video information, containing petabytes of data, today is still a very difficult, tedious and almost impossible to achieve task and automated driven vehicles, which need a very detailed view of the environment they operate in. To process the huge amounts of data, Cloud LSVA has implemented a cloud-based system, consisting of a number of layers which interact with each other by means of open and standardized interfaces.

As explained in the welcoming speech given by Valeo and TomTom, in three years of activity Cloud LSVA has developed important technology that can be applied not only to autonomous vehicles, but also in the agricultural, security and medical sector.

Key findings of the project were outlined during the event as the following:

It was a great occasion for the public not only to learn more about these new technologies, but also to experience live demos in three different cars, which recorded in real time the surrounding scenery and with project experts providing explanations of the showcased technologies.

The panel discussion provided an in depth perspective of how automation is a cross-sectoral matter and gave the public a chance to engage in a constructive debate. Topics discussed were in particular the envisioned result for the project, the extent application of AI to the project’s technology, Europe’s position at international level as driver of these technologies, what Cloud LSVA’s use is outside the AV domain and to what extend does Cloud LSVA advances the introduction of Level 4 and even Level 5 automated cars.

With regard to this last point, panellists had their say. “I think we can achieve level 5 automation, but changes have to be made at different levels”, said Brendan Russeau from TomTom, referring not only to user acceptance but also to infrastructure.

Suzanne Little from DCU spoke about a “Hollywood vision” of 5 level automation. “I think we could be seeing 5 level automation in the future, in controlled situations such as in the logistics field or for the movement of goods”, she said.

Of course, the use of autonomous vehicles must go hand in hand with changes at different levels, from infrastructure level to the management of data sharing and privacy and have an impact on the job market, such as insurance companies, for instance.

Although the debate on AV still leaves some unanswered questions, Cloud LSVA’s final event gave participants food for thought and a 360-degree vision of the status of the technology in this field.

So, is Cloud LSVA driving the autonomous vehicle revolution? The answer is yes. The Cloud LSVA project results represent a large step into the introduction of Level 3, 4 and even 5 automated cars in a somewhat further future. The recognition of vulnerable road users, such as pedestrians and cyclists, will be greatly improved, dramatically reducing accident casualties on European roads.