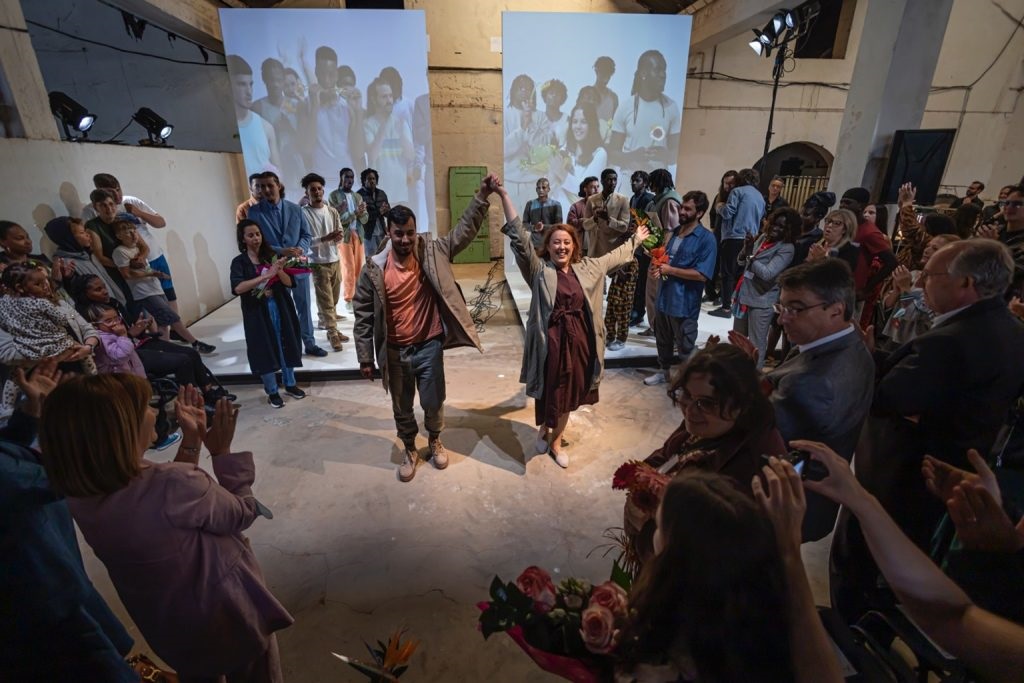 Research projects are exploring the capacity of artists to reduce inequality in the digital age.

A special opera performance in Lisbon improves inclusivity for the marginalised while digital literacy will create new artistic opportunities.

Four professional Portuguese singers performed the main roles in a new opera based on Homer’s “Odyssey” at a packed concert hall in Portugal’s capital Lisbon in mid-June.

Also on the stage that evening were 16 amateur performers from the central Portuguese city of Leiria, where they are members of the city’s “school prison” population. The prison houses offenders in the age range of around 16 to 21 years.

What’s more, a second group of Leiria inmates took part in the performance by video link from a stage that was located back in the jail 150 km away.

Welcome to TRACTION, a European research project that tackles social exclusion through the use of opera. The people behind it are redefining what is often perceived as an elite activity so that some of society’s most-marginalised groups – young offenders, migrants and the rural poor to name but three – can find expression for themselves.

‘Imprisonment, migration, poverty and courage have been stories in opera before,’ said Matarasso, ‘But not as they are told by the people most affected, in the languages they speak and the music they sing.’

TRACTION belongs to a group of European research projects that are exploring the intersection between creativity, society and technology - and the capacity of artists to reduce inequality in the digital age.

The opera is the work of a trio of Portuguese composers and is called “O Tempo (Somos Nós)”, or “Time (As We Are)”.

Each of the composers, who are all friends, did two of six scenes, which take 90 minutes to perform. The libretto, a text to accompany the opera, is also by a Portuguese native.

According to Matarasso, the story is based on the myth of Odysseus (or Ulysses in Latin) and his wife Penelope. While Odysseus is the wanderer who makes choices and faces temptations, Penelope is making choices and facing temptations of her own while she waits patiently for the return of her husband from the Trojan War.

TRACTION is finding new ways of making opera in, with and fOR today’s divers and democratic society

‘It became a metaphor for the experience of prison, separation and the choices that people face,’ he said. ‘The story came out of co-creation workshops between the writer and composers in the prison – each spent weeks doing sessions with inmates.’

Additionally for the inmates, three had solo spoken roles, five did solo rap numbers, one performed solo as a beatboxer and two featured in solo text readings.

The capacity audience of 1 200 at Lisbon’s Gulbenkian arts centre on 16 June included Portugal’s justice and culture ministers along with the head of the country’s prison service. A second performance was staged there on 17 June 2022.

‘It exceeded everyone’s expectations and received joyous standing ovations,’ said Matarasso. A couple of performances took place two weeks earlier in the Leiria prison, which was building on experiences in 2015 and 2018 when it was the location for performances of two Mozart operas.

‘The arts are central to how societies talk to themselves,’ Matarasso said. ‘TRACTION is finding new ways of making opera in, with and for today’s diverse and democratic society.’

He gives the example of the Enlightenment, when European philosophers promoted art to be a redemptive moral force against religious constraints. The aim of art was "to make virtue attractive, vice odious, ridicule forceful’ according to Denis Diderot, a prominent French philosopher, writer and art critic during the 18th C Enlightenment period.

Matarasso compared that to the dictatorships of the 20th Century, which sought to control and direct art.

‘Democratic states, founded on respect for human rights and diversity, would be wiser to recognise art as a territory in which values are expressed, shared and negotiated,’ he said.

The performances of “O Tempo (Somos Nós)” featured a total of about 30 inmates, who are young men in prison for serious offences and who are serving sentences that typically last several years, according to Matarasso.

The technology that played a key role in making the opera performances possible was developed by TRACTION itself. Its “Co-Creation Stage” video connects locations and people in real-time, allowing multiple stages and participants in different places to perform together.

TRACTION, which began in 2020 and runs through this year, is also behind opera initiatives in Spain and Ireland involving urban and rural populations who don’t normally encounter opera.

In Barcelona, the trial involves people at risk of social exclusion, with the main and final performances to take place in October 2022.

In Tallaght, a large and rapidly growing town in south Dublin, the trial will show how virtual reality can reach people living in remote and rural areas, and places the Irish language at the centre of a story of environmental responsibility.

Dr Mikel Zorrilla, coordinator of TRACTION and director of digital media at Vicomtech in Spain, said he is determined that the project leave its marks well beyond 2022.

‘One of our obsessions is to create a legacy after TRACTION - to share everything we learned and experienced with the community in the best way possible,’ Dr Zorrilla said.

The team will export the principles, technology and methodological approach that worked for them following the completion of TRACTION and all the organisations within the project will continue the research.

‘We believe this is just a step forward of a long journey and others will take the baton,’ said Dr Zorrilla.

Technology is a central element of ARTSFORMATION research, which looks at inequality in the digital arena.

The project is researching ways to improve the digital literacy of both artists and ordinary people, including ones from geographically isolated areas and with socio-economic vulnerabilities.

For centuries, the arts have served as messengers of powerful social reflections on everyday problems of society

The study includes a diverse range of activities such as workshops, exhibitions and residencies programmed across different European countries.

‘The artists and arts in general are also being part of what they have sometimes denominated “a rough sea” where there are always waves coming towards us, shaking us and sometimes not letting us take a break to breath, pause and re-think new models,’ said Christian Fieseler of ARTSFORMATION.

A professor for communication management at BI Norwegian Business School in Oslo, he is working together with artists and citizens ‘to develop their skills and capacities to respond to such a “rough sea” of digital transformation.’

Fieseler argues that socially engaged forms of art are important.

This is how art acts as a reflective agent,’ he said, ‘That not only denounces critical social issues but also seeks to re-think new possibilities, new alternatives and a better quality of life for those who have suffered the rigours of misfortune.’

A deeper understanding of the role of art in calling out abuses in society is another goal of ARTSFORMATION.

‘For centuries, the arts have served as messengers of powerful social reflections on everyday problems of society,’ said Fieseler.

‘In a technology-mediated world, the arts still have the same power to spotlight unfair and inhumane situations and have the capacity to re-define new perspectives to avoid dystopian futures.’

Back in Lisbon, one audience-member in the Gulbenkian concert hall in June 2022 epitomises the way perspectives can change for the better, according to Matarasso.

The opera-goer, a kitchen worker living in Lisbon, was himself once a prisoner at Leiria who sung in its 2018 performance of Mozart’s “Cosi fan tutte” (“So do they all”).

This article was originally published in Horizon, the EU Research and Innovation magazine

Ten projects based on Artificial Intelligence, Blockchain, Streaming and VFX / SFX, amongst other technologies, to compete in the Zinemaldia Startup Challenge

Lanhezi, a research project to generate knowledge and impact on the quality of future employment