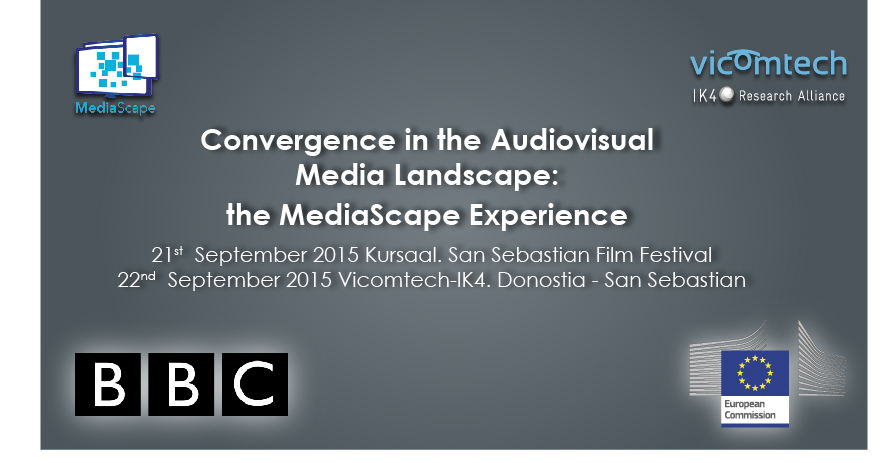 MediaScape is a European project led by Vicomtech-IK4 with the main objective of developing Web-based tools for the creation, management and distribution of media multi-screen multi-user services.

Objective of the event

The different sessions will foster media and content convergence within the TV, Film, and Internet industries, taking into account the European Commission’s perspective. Moreover, the opportunities that MediaScape can bring to these industries will be presented, enabling technology transfer and adoption through the generation of new business models.

This event has been mainly designed for agents of the Media sector, including the TV, Film, and Internet industries; as well as technology based companies and media Web application developers.

12:00     MediaScape: Technologies for the creation of multi-device media services

9:30       The MediaScape Vision and Mission: objectives, approach and architecture

You can attend only to one session or both

Electronic and Control Engineer by the University of Navarra, developed his master thesis at Fraunhofer Institut für Integrierte Schaltungen (IIS), Erlangen, Germany; PhD from the Computer Science Faculty of the University of the Basque Country. Igor is the Director of Digital Media & Broadcasting Technologies and has participated in many regional and European Projects and currently is Coordinator of the MediaScape FP7 project. He designed and coordinated the TV Lab of Vicomtech-IK4 and now works on its update and evolution. In addition, he is an Assistant Lecturer at the University of Navarra and is member of the Board of Directors of the Basque Audiovisual Cluster (Eiken).

Scientific and Technical Project Officer in the area of Converging Media and Content at the European Commission Directorate General for Communications Networks, Content and Technology – DG CNECT. Thomas has more than 20 years of international professional experience in information technology and telecommunications including Mobile and Media Consulting positions for LogicaCMG and Ericsson in Netherlands, Germany and Sweden. He is passionate for new technologies including (mobile) communication, broadcasting and Voice over IP.

Sean O’Halpin is the Lead Engineer in the BBC R&D Internet Research and Future Services section. He represents the BBC on the RadioDNS steering board and chairs the EBU Cross Platform Authentication working group. He has over 20 years’ experience in programming, specialising in coordinating data processing systems, real time communications and messaging systems. Since joining BBC R&D, he has worked on various projects including media bookmarking, ingesting the Twitter Firehose, designing the RadioTAG protocol, and a prototype of a programmable TV. His main research interests are in information flow and control over real time messaging systems from editorial and production to the home.

Telecommunications Engineer by the University of Mondragon and Master in Advanced Information System by the University of the Basque Country. Currently, Mikel is developing his PhD in interoperable technologies for the creation and management of multi-screen multimedia services (Computer Science Faculty, University of the Basque Country) and he is the technical coordinator of MediaScape. Since he joined the Digital Media & Broadcasting Technologies department in Vicomtech-IK4, is involved in designing, developing and coordinating several local and European project in the field of Interactive Media Technologies.