The Provincial Councils of Araba, Bizkaia and Gipuzkoa join the Basque Industry Platform

Vicomtech participates together with 24 other companies and organizations in the platform created by Spri, EVE and the Vice-Ministry of Language Policy to promote the use of Basque in the industrial field. 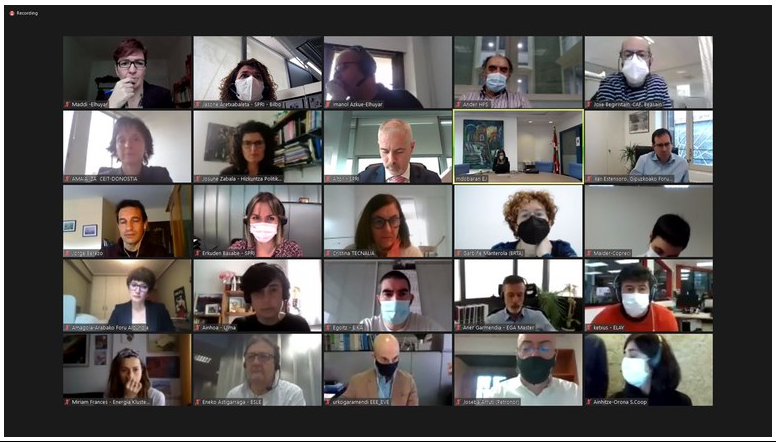 The INDEUS General Assembly was held recently, where the 2020 financial year was analyzed and the challenges for this year were established.

The Basque Industry Platform, INDEUS, today held its annual General Assembly in circumstances totally different from the first general meeting held a year ago. In this second General Assembly carried out by telematic means, the companies and institutions that promote the project have welcomed the Provincial Councils of Araba, Bizkaia and Gipuzkoa that have joined INDEUS. As well as the companies and centers that have joined the initiative in recent months: Biele Group, BRTA, Ega Master and Orona.

The Deputy Minister of Language Policy, Miren Dobaran and the general director of Spri, Aitor Urzelai, have chaired the meeting in which the work carried out in 2020 has been analyzed and the challenges for this year have been set.

The balance of 2020 has been marked by the consequences that the pandemic has had on INDEUS's activity, as has happened in the rest of its activities. Despite this, the Platform has continued to function throughout the year, with meetings of the Working Groups and the Promoting Group.

With an eye to 2021, these have been the challenges that the people who participated in the meeting have analyzed:

The companies and public entities of INDEUS will meet again in March, but this time it will be on the occasion of the meetings of the three working groups.

INDEUS is the Basque Industry Platform, promoted by Spri-Development Agency, the Basque Energy Agency, the Vice-Ministry of Language Policy and the Provincial Councils of Araba, Bizkaia and Gipuzkoa. The initiative arose to help industrial companies that have decided to work in Basque to implement ways to obtain products and services that language. In this journey, INDEUS has also opened its doors to companies in which the presence of Basque is scarce, with the hope that the experience of the previous ones can serve as a model. More than 20 companies have joined the platform since it began in 2018.

The objective of INDEUS is to support the competitiveness of Basque companies by increasing the presence of Euskera in the industrial sphere of the Autonomous Community of Euskadi. To achieve this, it has already established the following routes:

The companies and entities that participate in the project have been organized into three working groups:

And the public bodies integrated in the Platform are: the Vice-Ministry of Language Policy, Spri-Business Development Agency, the Basque Energy Agency and the Provincial Councils of Araba, Bizkaia and Gipuzkoa.