An Abdominal Aortic Aneurysm (AAA) is a condition consisting of a weakening and ballooning of the abdominal aorta, exceeding the normal diameter by more than 50%. If not treated, they tend to grow and rupture with a high risk of mortality. Endovascular Aneurysm Repair (EVAR) is a minimally invasive alternative to open surgical repair involving the deployment and fixation of a stent-graft via catheterism. This excludes the damaged wall from circulation and creates and intraluminal thrombus which tends to shrink after a successful intervention. EVAR is much less aggresive that open surgery and has significantly lower operative mortality but the survival rate after 2 years is almost equivalent. The reason is  that  the  aneurysm  is  excluded  but  not  removed,  leading  to  some  problems,  known  as  endoleaks,  due  to  wrong fixation, recurrent flow into the thrombus area or device wear.

Pre-operative  planning  is  performed  on  the  basis  of  CTA  imaging  by  performing  patient-specific  measurements (diameters and lengths) which allow the selection of the most suitable endoluminal device from a catalogue or the design of a patient-specific endograft in the case of complex anatomies. One main problem is that the relative position and deformation  of  catheter-aorta  and  endograft-aorta  is  not  known  at  the  planning  and  design  stage.  Prediction  such behavior by using deformable models may lead to better design and a reduction of the 2-year after EVAR mortality.

In the intra-operative scenario, X-ray Angiography (XA) offers valuable but limited information, and still is difficult for the surgeon to orient himself, visualize relevant structures and compare the current situation with the planning and designed endograft. Deformable models and image registration procedures may help to align pre-operative and intra-operative imaging and models so as to provide more valuable information for image guidance. Furthermore, this information could help validating pre-operative simulation models.

Close follow-up is required after EVAR by performing CTA examinations at least yearly. Correctly excluded aneurysms tend to shrink, which is usually measured by largest diameter. However, aneurysm volume is a better indicator but is not used on routine due to lack of robust thrombus segmentation methods, as this structure is not contrasted and shows fuzzy borders. Furthermore, it would be very useful for clinicians if they could align and compare different post-operative CTA time series in order to assess the evolution of the aneurysm by different shape analysis, migration of the endograft and other changes that could be relevant for assessing the rupture risk. This requires specific research in deformable models and image registration methods in order to align different time series of volumes with changing structures.

One common technical challenge in these three scenarios related to the endovascular intervention on AAAs are the study  of  deformable  models  on  medical  images  in  this  context  (CTA  deformable  model  simulation,  XA-CTA  intra-operative) which is the main objective of the DEFENSE project. These models will be able to characterize the changes and deformations occurring before, during and after the intervention. Furthermore, the study of the deformations involved could  lead  to  new  clinical  evidence  on  how  to  perform  the  procedures,  correct  the  endograft  designs  based  on  the observed geometries and endograft used, and evaluate the rupture risk after the intervention.

Vicomtech will participate in the 3D model generation by segmentation of relevant structures present in CTA or XA images (aortic lumen, thrombus, endoprosthesis, vertebrae...) and in the aneurysm follow-up and rupture risk prediction in the post-operative stage. 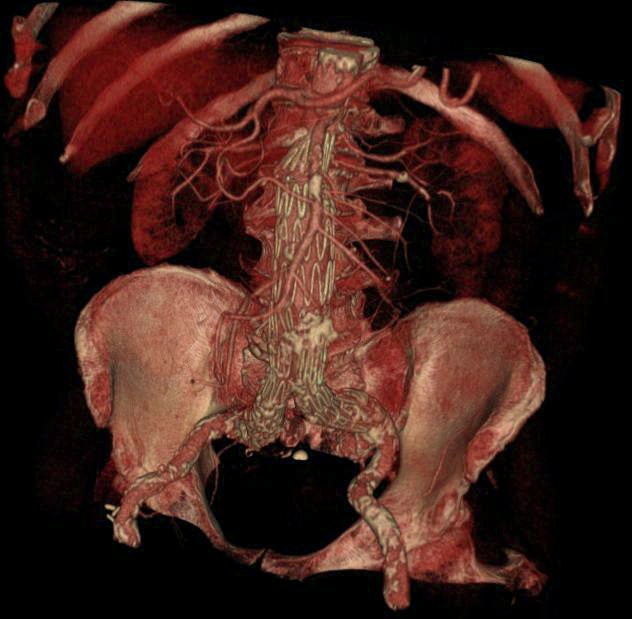