This new competition, in which Vicomtech also participates as an expert jury, is part of ’Spanish Screenings: Financing & Tech' and will be held at the same time as the European competition. 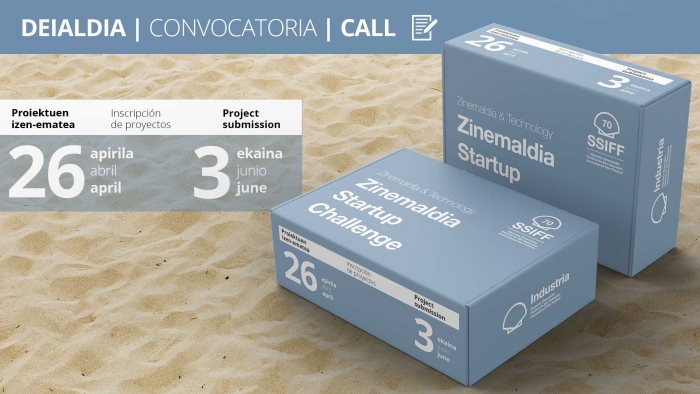 Today, the San Sebastián Festival opens the fourth call for the Zinemalda Startup Challenge, a competition aimed at entrepreneurs and startups from the state and Europe whose projects incorporate new technologies applied to the audiovisual field. The initiative is part of Zinemaldia & Technology, a strategic commitment of the Festival to position itself as a reference space for reflection on technology and the audiovisual industry, to strengthen ties between the two sectors and to publicize the opportunities they generate for creation and business. This year, for the first time, a specific competition for entrepreneurs and state startups has been created, which will be held at the same time as the European competition. The registration deadline will end on 3 June.

The competition for entrepreneurs and state startups is one of the activities of “Spanish Screenings: Financing & Tech”, the second event of “Spanish Screenings XXL. An international market for Spanish audiovisual production.” The project is part of the Recovery, Transformation and Resilience Plan (PRTR) to strengthen Spain’s role as Europe’s audiovisual hub and is promoted by the Ministry of Culture and Sport through the ICAA and the Ministry of Economic Affairs and Digital Transformation through ICEX. In addition to the aforementioned competition of state startups, “Spanish Screenings: Financing & Tech” will include a day with important international investors and talent representatives.

Projects submitted to both competitions must meet several requirements: start from a newly created entrepreneur or startup – set up after 31 December 2016 – at any stage of development; be based on the application of new technologies to the audiovisual sector; have tax residence in Spain or a European country; and consider the possibility of launching the business project in the Basque Country.

The selected projects will be presented at the Zinemaldia & Technology conference that will take place on Thursday, September 22nd during the San Sebastián Festival and which will also include a master class.

A committee of experts made up of professionals from the BIC-Centres for Business and Innovation of the Basque Country, Tecnalia and Vicomtech, will select ten finalist projects, five Spanish and five European, who will have the possibility of free access to an incubation space for one year at one of the BICs (Business Innovation Center) located in the Network of Technology Parks of the Basque Country. An independent jury will select the winning projects, one in Spain and one in Europe, which will each receive 10,000 euros. In addition, this call will place special emphasis on entrepreneurship and will allocate an additional 3,000 euros to reward the best selected project submitted by an entrepreneurial person or team. Winners and finalists will also have the opportunity to access funding of up to 500,000 euros for the development of their project in the Basque Country.

The Basque Government, through the Department of Economic Development, Sustainability and Environment and SPRI, is promoting the Zinemaldia Startup Challenge, the central initiative of the Zinemaldia & Technology conference, organised by the San Sebastian Festival in collaboration with Tabakalera, through its audiovisual lab 2deo, TECNALIA, ALÍA (Audiovisual Industrial Alliance) and Vicomtech.

Vicomtech presents the challenges of connected, cooperative and automated mobility at Go Mobility

A group of Basque companies is developing AMA, a comprehensive maternal care platform.