The mission of c-Space is to develop a new generation of low-cost creative tools that turn the real-space surrounding us into the backdrop for new forms of creative content.

c-Space builds on the widespread trend of Internet-based sharing of “casual” videos recorded with smartphones or tablets. In c-Space, video streams recorded through mobile devices are sent to a central service that creates, in nearly real time, a continuously evolving 4D model (3D plus time) of the corresponding real scene. As a result, the whole 3D model-creation pipeline is streamlined and dramatically shortened with c-Space.

The result is an easy-to-use low-cost technology that allows affordable creation of 4D models of complex scenes from mobile devices, for the benefit of individual creators or creative industries (operating in 3D game content creation, architecture, advertisement, cultural tourism etc.).

Furthermore, the knowledge of the surrounding 4D model is used to create a virtual & augmented-reality (AR) mobile tool that allows:

The 4D scene becomes also the spatio-temporal backbone of a brand new set of creative experience tools based on visual and affective computing built upon on a projective augmented reality paradigm.

By using pico-projectors, which -in the near future- are set to become a commodity available in mobile devices, c-Space projects “augmented” content on top of the surrounding scene (e.g. a table or the pavement), which becomes the backdrop for new forms of creative content.

As a result, interesting new creative scenarios can be envisaged, e.g. users projecting “augmented” content (e.g. messages, graphics, etc.) around them while walking or travelling. Creativity will be eased by personalized interactions based on adaptation of information to emotional aspects and user goals.

Non-technical implications brought by such a new set of creative tools will also be explored, including:
•    Societal acceptance and societal implications.
•    Creation of brand new business models ranging from projected reality advertisement to new forms of augmented reality content publishing. 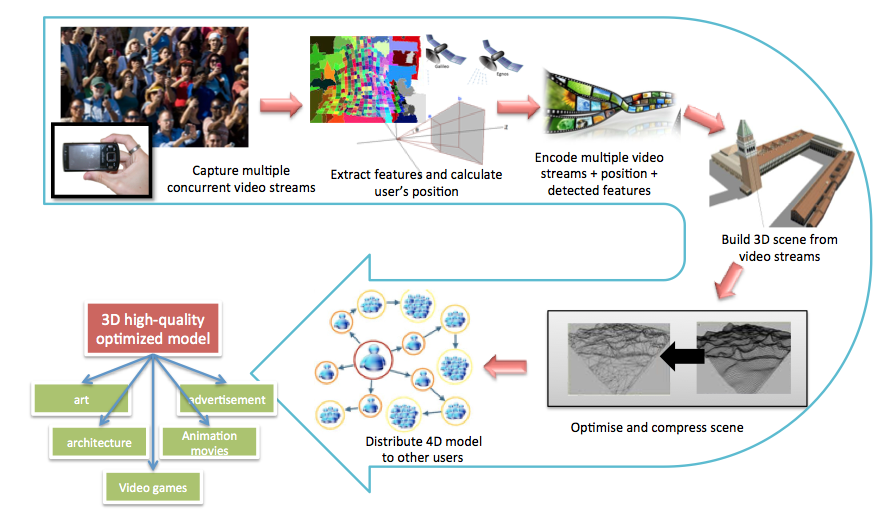